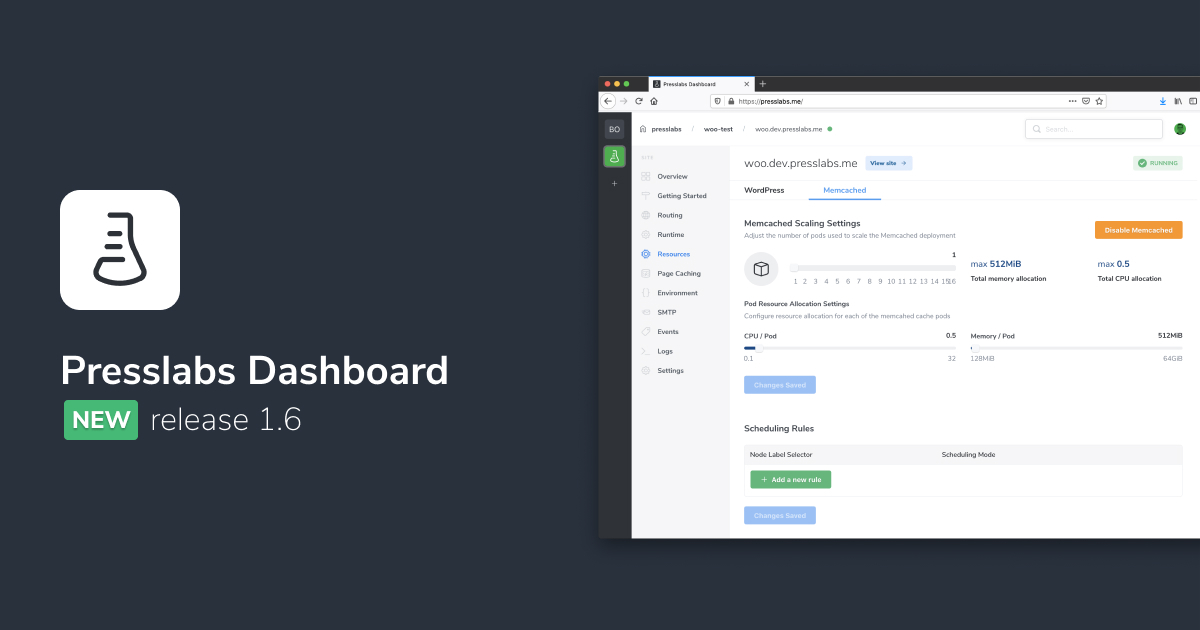 It’s been almost a year since we’ve launched the first version of our Presslabs Dashboard platform. We’ve had a very productive year in terms of new functionalities added to the core, and for sure, we have many other projects and features in the pipeline.

According to a cloud computing survey provided by IDG, cloud adoption rises again in 2020. Over 50 % of respondents declared that their organizations have planned to migrate to the cloud in the coming months. This analysis confirms once again, that the organizations are ready to implement cloud technologies.

If some years ago, the idea of adopting cloud technologies was a scary one, today we can say that we are very proud of it. That idea played a huge role in allowing us to build the first cloud-native hosting platform dedicated to big publishers, WordPress agencies, and WooCommerce shops.

After five successful releases, we are proud to announce the launch of the Presslabs Dashboard 1.6.

The newest version is out, and it is time for us to introduce you to the most notable changes added to the platform.

Each version of Presslabs Dashboard brings small and not-so-small improvements that are silently changing the user experience.

The new query parameters feature allows the user to add query parameters directly from the Page Caching section. This new feature adds basic functionality to the caching mechanism, but it comes with a good number of levers allowing users to take advantage of the platform’s built-in features.

If you use to publish tons of articles, there is no doubt you’ll enjoy it, because thanks to this new feature you’ll be able to avoid skipping the page cache.

Today we’re excited to announce that we’ve added a “Pause Site” feature, which allows our customers to pause their sites.

Because we are cost-effective oriented, we always looked for ways and opportunities to further optimize availability and workload cost and the 1.6 version is no exception.

Adopting the new feature is a great chance for Presslabs Dashboard to lead the way for a faster and sustainable web overall. The intended use-case for this feature is development sites, which don’t need to be running all the time.

If you are interested in optimizing your cloud cost, you can take into consideration the option of scheduling the pods to run on preemptible machines. Presslabs Dashboard allows you to use preemptible VMs instances instead of standard ones without requiring any technical knowledge or even awareness of Kubernetes as a concept.

Back in August 2020, Presslabs Dashboard 1.5 introduced the page caching mechanism for caching your WordPress sites.

For a brief recap, we need to mention that our platform supports both Memcached and Redis implementation. The only difference is that if you choose Memcached, you have no other preliminary steps to follow; everything is configured and ready to use.

But the new version comes with improvements in the infrastructure functionality, tailoring it according to the needs of our target audiences.

These changes are also reflected in the way the platform works and how easy it is to use for potential customers. That being said, for those who for various reasons, prefer Redis instead of Memcached, we’ve implemented a Disable Memcached button, which allows users to disable the Memcached implementation.

Note that the new feature will disable both the site page caching and the PHP object caching. So in this scenario,  if you are using Memcached for page caching, the use of this functionality is prohibited.

The new version also comes with several bug fixes and changes that affect the customer’s experience, so we’ve prepared for you a hand-picked selection of those small improvements added to the Dashboard.

First of all, we’ve fixed a pod termination issue, the error appears when pods are deleted, and the connections are not drained properly, so the requests are stopped prematurely. With the new version of the Dashboard and with the latest stack-runtime images, we treat the pod termination properly, waiting 10 seconds until the connections are drained.

We also fixed some login errors, and we’ve increased the number of the site replicas from 16 to 32, which allows greater flexibility.

If the features listed above haven’t convinced you to try Presslabs Dashboard, here you have some additional improvements that come bundled with the next releases.

As for what the future holds, we can tell you that the aspect of our Presslabs Dashboard will further undergo some changes as we’ll constantly work on optimizing it, as well as introducing new features.

We intend to add a new method that allows users to specify tolerations and node affinity for Dashboard and Stack components. This feature is useful when you want to run a single component into a node or schedule it on a specific node.

As we mentioned in the previous article on launching Presslabs Dashboard 1.5  we set out to implement a monitoring system for your sites and our development team is working hard to finalize it.

One more important step we are working on is updating the Presslabs Dashboard documentation, which is a priority for us right now.

In case you have any questions related to this topic, or if you wish to find out more about our Presslabs Dashboard platform, please drop us a line at dashboard@presslabs.com.