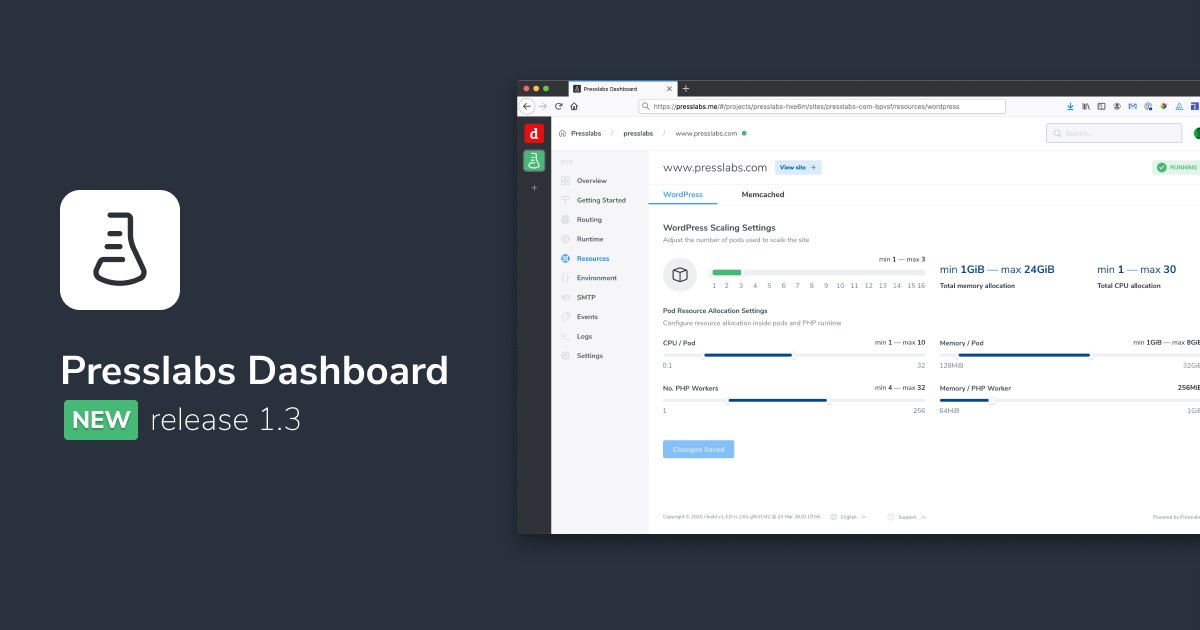 We are very excited to announce the release of the 1.3 version, which is the latest version of Presslabs Dashboard and, by far, comes with the most significant changes both in terms of front-end and back-end functionalities.

Let’s go through the most important 1.3  updates, but before, we should take a look at the Presslabs Dashboard structure, which has the following components: organization, project, and the site as they are essential to understand resource allocation and management.

When using the Presslabs Dashboard for the very first time you’ll be invited to create your first organization, project, and site. The steps you should follow to create the mentioned elements are straightforward and intuitive and don’t require advanced GKE knowledge.

We’ve created a comprehensive tutorial that will guide you step by step through the setup. Write us at dashboard@presslabs.com if you have any questions.

Now, let’s review the most significant features that we’ve added, to make our solution much easier to use.

With the Presslabs Dashboard, you can automatically scale horizontally based on the incoming traffic, directly from the Resources tab,  which allows you to configure the resources used to scale your WordPress infrastructure and that helps to keep the site highly-available and speedy under heavy traffic.

With version 1.3 comes the horizontal and vertical scaling for Memcached, and now the cache is shared by all available nodes. CPU, Memory, and Nodes are configurable in the section known as Memcached.

In order to keep the cost under control, we’ve implemented a configuration section, called Quotas that can be used to limit the resources used for each project: CPU, memory, number of pods and number of sites.

Another upgraded feature can be found in the Database tab, where horizontal and vertical scaling for the MyQSL cluster are controlled.  You are able to configure the CPU, Memory, and Nodes for the MySQL Cluster straight from the dashboard. Also the MySQL Cluster storage size and class are now configurable when creating a new Project.

Starting with this version, the Presslabs Dashboard allows tapping into using the preemptible nodes from Google Cloud, which allows you to optimize your cost. Now, the WordPress pods can be scheduled to run on preemptible nodes.

#Fine-tuning for the Presslabs Dashboard Settings

The Presslabs Dashboard underwent a significant facelift at the beginning of January when we’ve launched the version 1.2.  We’ve made some fine-tuning of the MySQL settings to be more efficient for WordPress. Also, we’ve added a site status that enables the owners to invite or remove new users from their organization and we’ve fixed a user invitation error.  A substantial upgrade of this version is the MySQL Backups listing support, which we’ve added for each project individually.

Version 1.1 of the Presslabs Dashboard was released in November 2019, with some improvements on how Dashboard is deployed in Google Cloud Marketplace. We’ve validated the input field from the Marketplace installer form. It used a job to deploy the Presslabs Stack in the presslabs-system namespace.

Right now, we are working hard on improving the setup process in the Google Marketplace for the 1.4 release.

We invite you to contribute to the core open-source of the project on GitHub: code, ideas or feedback.

If you are interested in the app, we can schedule a demo with one of the authors of the Presslabs Dashboard. Simply register on https://www.presslabs.com/dashboard/ or send us an e-mail at dashboard@presslabs.com.