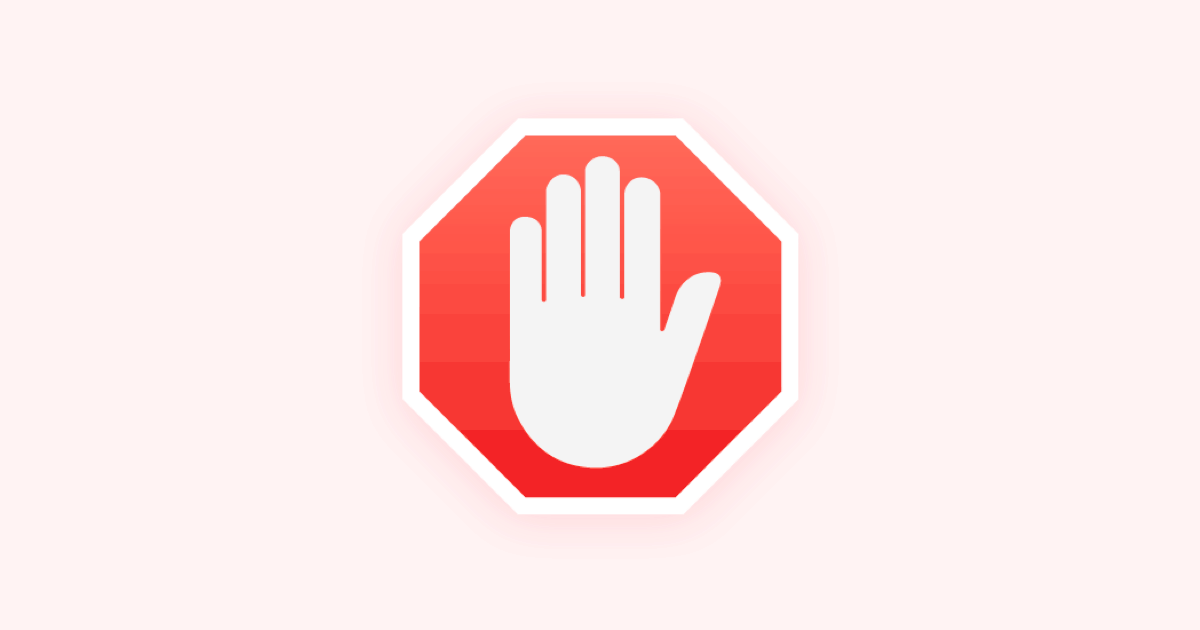 Nearly half of all internet users in the United States have an ad blocker installed. That number has only risen in recent years, especially since Google announced that Chrome would include ad blocking software by default. Countless scores of people suddenly found themselves protected from a variety of advertisements, and publishers collectively cringed at what this could mean for revenue.

The vast majority of online publications rely on ads to monetize their content. Now that the built-in Chrome ad blocker prevents most users from seeing advertisements, what does that mean for the future of monetization?
There’s no clear-cut answer for this incredibly complex issue. The good news is it doesn’t mean you have to shutter your publication and call it a day. By examining your site’s relationship between ad blocking, advertisers, and readers, you may be able to stay in business without reinventing things from the ground-up.

There’s nothing new about ad blockers on the internet. Most people had heard of them before Chrome’s big decision, and a huge percentage of people used them on a daily basis. The key difference is that ad blockers had to be manually installed by users in order to function. When the software was integrated into Chrome itself, suddenly ads disappeared by default, no extra plugins required.

About 40% of consumers aged 18-29 use an ad blocker each time they go online. For the surrounding age brackets, that number drops to 26-29%. In general, the more tech savvy a consumer is, the more likely they are to use an ad blocking technology. This is a costly challenge for publications that monetize content via advertising, as their customer base is far more likely to opt out of online ads.

Ad blockers work by intercepting ad content from known services and preventing it from rendering in the user’s browser. It’s a fast and efficient filter that watches for suspicious URLs and denies them access to local storage.
Contrary to what many publishers might think, the majority of people who use ad blockers don’t do it simply to block ads. Their main concern is keeping out viruses and malware, both of which are often delivered through invasive online advertising. It’s a safety and privacy issue, not an attempt to reduce revenue.

Chrome is the most popular browser in the world, easily claiming its massive 60% market share. Baking an ad blocker into the code means that same user base now has instant, default access to ad blocking software, no effort required. That could easily double the number of people actively blocking ad content, and worst of all, it happened practically overnight.

The good news is that Chrome’s ad blocker doesn’t work exactly like standard ad blocking extensions. Instead of blacklisting ad services and denying them access right away, Google has worked to identify “unwanted elements” and prevent only that content from reaching the end user. In other words, Chrome doesn’t block all ads, just the bad ones.

Google based this filter on a number of elements, most importantly the The Initial Better Ads Standard (IBAS). This initiative aims to strike a balance between user wants and publisher needs, allowing both groups to benefit from a faster, safer web. The IBAS rewards sites that utilize a balance of advertising content instead of spamming pages with as many banners as they can. It also identifies troublesome players in the field, aiming to make readers trust online ads once again.

Chrome’s ad blocker only filters out sites that fail these standards. If a publication sticks to the plan, keeps ads to a respectable amount, and doesn’t rely on sketchy sources of revenue, Chrome won’t filter out the advertisements. While this may impact a wide variety of online publications, the goal is to transform the way the web works so that businesses can turn a profit while keeping everything above board.

In 2017, The Coalition for Better Ads (CBA) realized the state of the online advertising industry was unsustainable. The team surveyed over 25,000 web users to see what their biggest complaints were about online advertising. The results weren’t all that surprising: pop-ups, flashing images, auto-playing videos, sticky ads, and intrusive mobile banners were all listed as the biggest offenders in the online advertising world.

Publishers see this from an entirely different perspective. The ad types listed above are generally the highest grossing types of content. Avoiding them means losing a potential source of revenue, but using them means annoying readers who don’t use ad block.
Google took notice of the Better Ads Experience program and quickly threw their weight behind it. Now, with the default ad blocking software in Chrome, the company is taking active steps to enforce the principles in an effort to improve the web.

The CBA’s ad experience program is a voluntary initiative for all the participants in the online advertising industry, especially web content providers. Following the team’s advice means cutting back on certain types of ads, eliminating others, and designing ad programs that truly respect the end-user.

The ideal long-term situation would be to discontinue ad blocking altogether, allowing smart, balanced advertisement layouts to passively fund the web. Users wouldn’t feel the need to block ads if they weren’t assaulted by invasive, distracting, and dangerous content on half the web.

Google’s move to block ads in Chrome that don’t comply with these guidelines should be a powerful motivating factor for researching and sticking to these principles. Especially when potential revenue is on the line.

Nearly 70% of web users say they installed an ad blocker after encountering an annoying, intrusive, or dangerous ad. Most of those people said they would never revisit the site that delivered the ad, too.
The CBA essentially wants to codify that emotion to punish publications that violate the better ad standards. Google’s move to make Chrome block bad ads by default further strengthens that position.

The CBA identified a dozen ad formats that are likely to violate the better experience guidelines. These include the formats listed below, all of which are seen as unacceptable by the vast majority of web users, especially when they’re on mobile devices.

By Google’s own estimate, the better ads initiative along with Chrome’s default blocking efforts will only affect 1% of online publishers. Even then, those targeted by the movement are given a grace period to fix their site and submit for re-evaluation. It’s also important to remember that users can disable the automatic ad blocker, so if you have a good rapport with your users, they’re likely to whitelist you right off the bat.

The real purpose of these ad experience efforts is to get rid of annoying advertisements, malware, and to help eliminate fraudsters. As long as you keep your business on the up-and-up, you should be fine.

#How to Maintain Strong Ad Revenue

With ad blocking extensions and Chrome’s own ad blocking technology leading the web, how can content publishers maintain strong monetization? It’s not as impossible as it sounds, really. Google isn’t trying to ruin online advertising, but to make it better and safer for everyone involved.

#Comply with the Better Ads Experience

The most direct way of preserving (or increasing) ad revenue streams is to comply with the Better Ads Experience program. This will neatly avoid Chrome’s ad blocking efforts and could give your site a boost in SEO rating, as well.
The most direct way to do this is to visit the Coalition for Better Ads on the web and check through their ad standards page. This shows the most frustrating types of ads as reported by 25,000 users. Make sure your publication avoids these entirely.

Google has made it easy to analyze your site’s advertising layout through the Ad Experience Report tool. Once you follow the CBA’s guidelines listed above, head to your Google webmaster’s search console dashboard and choose the ad experience report from the menu. Pick either desktop or mobile, choose a property, then run the tool and let Google make suggestions.

If anything pops up in the report, analyze the issues and make changes right away. Be sure to run the test for both desktop and mobile, as both groups have slightly different best practice standards as far as advertisements are concerned.

More people are viewing more pages on mobile devices than ever before and you can check our adblocker stats for more details. They’re also using smaller screens and less powerful devices than desktop viewers, meaning they get frustrated with poor ad placement much faster. Ad layouts need to be customized for mobile users to avoid these situations, and it’s not all that difficult to pull off.


There are three basic principles of optimizing mobile ads: stick to banner images whenever possible, avoid interstitials, and use video ads sparingly. When deployed correctly this can dramatically increase mobile ad revenue and improve your relationship with mobile users, as well.

#Less Can be More

How can removing ads from your site increase revenue? Apart from dodging Chrome’s ad blocking efforts, there are a number of benefits serving fewer ads can bring to your site. Many audits claim revenue rises when they cut their ads by as much as 30%. This largely has to do with boosting page loading speeds, which gets content to viewers faster and encourages them to stick around longer. And users who spend more time on a site will see more ads. A quick glance at our performance stats allows you to check how much your site speeds increases when you loose some ads.

Even though online advertising isn’t dead, that doesn’t mean you have to limit yourself to a single source of revenue. Diversifying income potential is the key to a thriving business, and with the vast resources of the online world at your disposal, there’s absolutely no reason to stick with ads, even if they’re working.

How you pursue alternative revenue streams varies depending on your industry. For many publications, offering e-book sales or virtual webinars is a profitable pursuit. Others stick to memberships and subscriptions, both of which deliver highly-sought exclusive content for regular visitors. More common for content businesses are sponsored posts, affiliate sales, and paid reviews which, if done tastefully and correctly, can often replace advertisements altogether.

The news that Chrome would ship with a default ad blocker starting February 2018 shook the internet. Users didn’t expect this from an advertising and search giant like Google. Publishers didn’t, either, and their first reaction was to hold their breath and wait to see what happens.
Fortunately, all this panic was for nothing. Google’s efforts are aimed at sculpting a better web by eliminating fraudulent ads and encouraging publishers to respect users by deploying reasonable ad layouts. Many content creators do this already, and those that don’t have easy to follow guidelines to get things back on track.

So, will the Chrome ad blocker affect your revenue? Not likely. And even if it does, there are plenty of things you can do to compensate.